Self-Prescribing Herbs Can be Risky

Patients should inform doctors of all medications being taken 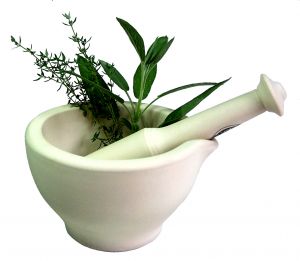 But when patients self-prescribe this herb for cholesterol and blood pressure concerns and then fail to tell their anesthesiologist or surgeon, health complications can result during surgery. A recent report published in the Journal of American Medical Association highlights the potential dangers of herbs and surgery, but local general surgeons have been informed of the same concerns for nearly five months.

A patient’s variation of the brochure What You Should Know About Herbal Use and Anesthesia is available at Home Hospital’s ambulatory surgery center.

“The problem is patients don’t recognize herbs as medications,” said Bochenek, who is also president of Anesthesiology Services.

Anesthesiologists are researching nationally how certain herbals interact with specific anesthesias, according to information published by the American Society of Anesthesiologists. For example, herbs may extend anesthetic effects, and others such as garlic can increase the risks of bleeding.

When patients neglect to inform their physician or surgeon what or how much herb they are consuming, the herb can mix with medication or anesthesia. Bochenek said patients who forget to tell the surgical team what they are on is not uncommon. For example, when some women list the medicines they are consuming, many don’t acknowledge birth control pills.

In the past, patients at Sagamore Surgical Center were asked what medications they were taking. Now the staff has rephrased the question to include herbs and supplements too because patients failed to identify some products.

“A lot of people do not see these as medicines so they leave them out,” said Ann Keyes, assistant directcr of nursing at Sagamore Surgical Center. “But then you look at their lab work … and see something.”

Surgical teams also have to be cautious of herbs because they are not consistent in dosage or content. Herbs, unlike over-the-counter medications, are not regulated by the Food and Drug Administration.

“To me it’s just playing Russian roulette,” Bochenek said. “You’re just spinning the chamber and pulling the trigger with some medications.”

Patients’ faulty thinking comes from the perception herbs are natural and safe, according to Nick Popovich, professor in the Purdue School of Pharmacy with an interest in over-the-counter and herbal medicines.

“Herbal medicines can cause a lot of problems with respect to drug interaction and complications associated with surgery,” Popovich said. “The message is: Before you take herbal medicines – and if you are on prescribed medicines – check with your doctor or pharmacist to make there are sure no interactions.”

If a patient is found to be on an herb or the dosage could complication the surgery or related medications, the procedure may be delayed to ensure the herb has exited the body. At least two weeks is generally the wait time.

Dr. Angelica Kokkalias, a Chinese oriental doctor and medical doctor, is concerned the publicity of this report could deter people from herbs altogether.

“The doctors should not scare patients,” said Kokkalias, who resides in West Lafayette but practices in Zionsville and Indianapolis. “I think it’s the responsibility of the state to educate physicians about herbs.”

When Kokkalias advises patients of an herb for wellness or to treat an ailment, she doesn’t recommend they’ buy a bottle off a drug store shelf. She works with a national company that reports the ingredients of the herb, so there is no guesswork.

“Western doctors need to be more open minded and holistic, and the holistic need to learn more about Western medication,” Kokkalias said. “The safety of the patient is involved.”