By Amy Patterson-Neubert Journal and Courier

For almost two years, Vicki Clark has suffered from frozen shoulder – adhesive capsulitis – a condition that inflicted shooting pain in her upper left back, shoulder and neck area.

Clark sought relief from a variety of specialists in traditional medicine but she finally found relief from ‘merging two worlds of medicine – East and West. 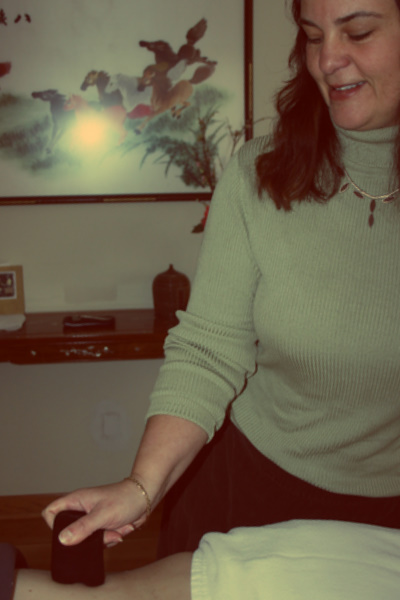 ”A combination of acupuncture’ and intense physical therapy benefited me,” said Clark, whose treatment was under the guide of an Oriental and medical doctor, Dr. Angelica Kokkalis, and an occupational specialist, Dr. Joseph Sliwkowski, Kokkalis a West Lafayette resident who is the director of Chinese medicine at the Center for Complementary Medicine and Pain Management at St. Vincent’s Hospital in Indianapolis, also recommended that Clark incorporate massage therapy into her equation of wellness, to enhance the results of acupuncture. Acupuncture is a part of traditional Chinese medicine (TCM) that dates back 3,000 years. Acupuncture needles stimulate the nervous system, and its energy, to release pain-killing and inflammation-reducing substances to the blood. TCM believes that pain and disease are created when there is a blockage of energy; known as Qi’. More than 200 common clinical disorders benefit from acupuncture, according to the World Health Organization.

Millions of people are turning to nontraditional forms of therapy, complementary and alternative modalities known as CAM, from ingesting herbs to seeking chronic pain management with acupuncture or prolotherapy. Prolotherapy IS an osteopathic deep injection technique used to eliminate some chronic pain involving ligaments.

Some patients feel the traditional methods have let them down, and other patients are taking more of an interest in their health. The number of Americans who use alternative therapies has increased fro~ 33 percent in 1990 to 42 percent ill 1997, according to the National Center on Complementary and Alternative Medicine (NCCAM) of the National Institutes of Health.

In Lafayette, the Association of Complementary Therapists Inc. meets monthly to discuss alternative therapies. There are approximately 96 members in the group and 650 mailings are sent quarterly.
But alternative and complementary therapies aren’t new to the world. Many of these have been around for centuries and are more prevalent in other countries. For example, in Germany, St. John’s wort, an herb, is more popular than America’s No.1 prescription medication for depression, Prozac. In Europe, naturopathy is well-received, according to naturopath Dr. Claudia Hanau of West Lafayette, but in the Midwest, it’s a small faction of health care.

What’s new is the two worlds of treatment are integrating nationally, and in Clark’s case, locally also.

“I think despite both camps, it’s going to happen. Both sides were kind of arrogant and lofty in the beginning,” said Dr. Palmer MacKie, medical director at the Integrative Pain Center at Wishard Hospital in Indianapolis, and internist and clinical assistant professor of medicine at the Indiana University School of Medicine. The Integrative Pain Center at Wishard Hospital has been open for about a year.

The melding of the two worlds is happening more frequently on the East and West coasts and in the southern part of the country, more so than in the Midwest.

Dr. Joseph Sliwkowski, medical director of the Regional Occupational Care Center at Unity Healthcare, moved to Lafayette from Boston more than a year ago
to join Unity, a group that is building a dedicated outpatient center in southern Lafayette. When he left Boston, he left a rehabilitation hospital, where alternative therapies including acupuncture were integrated.

“I’d like Unity to have an integrated medicine component,” said Sliwkowski, who is pleased with Clark’s progress. “I’m not threatened by it, and it’s a great alternative to have and I’d like to see more of it here.”

Kokkalis has been at the Center for Complementary Medicine and Pain Management for five of the department’s nine-year history. Here, she is involved in an acupuncture and stroke study, in addition to treating patients.

“It’s a blessing to have alternative in combination to Western. They should look at it as complementary, not competition,” Kokkalis said.

Entering the mainstream But before that melding takes place nationwide, the fear and
stigma accompanying alternative and complementary medicine will need to be abandoned. Some of it originates from the difficulties in standardizing procedures or establishing regulations. For example, herbs are not approved by the FDA because they are considered dietary supplements, not drugs. And decades ago, physicians practicing alternative therapies lost their licenses and were even put in jail.

“We’re putting ourselves at risk to do this type of medicine, and we’re all aware of it,” said Dr. Charles Turner, a Lafayette family physician who started incorporating alternative therapies into his practice during the last few years. Turner advertises that is he is specializing in a holistic approach to the art of medicine.

The apprehension about alternative medicine also surfaces from misuse or false promises.

“There is a lot of nonsense and garbage in alternative medicine. I’m not promoting all of it,” said Turner.

But in response to the unknown, more reputable institutes, such as NCCAM, are leading studies and suggesting regulations, Turner is participating in a natural growth hormone study that was reviewed by the Food and Drug Administration and approved by the Investigational Review Board.

Turner expects the demand from young doctors for more alternative therapy education and their desire to practice it will make the treatments more mainstream.

But-he also expects many will “stick to the old party line.”

“There is more money in practicing medicine the regular way. Plus (alternative) takes longer to deal with patients,” said Turner, who sees 15 to 20 patients a day now. He used to see 35 to 50 daily. With alternative medicine, “You’re dealing with more sophisticated people, who are asking a lot of questions.”