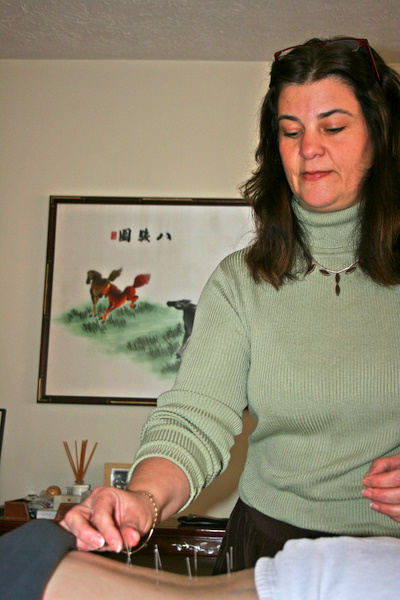 The mechanism by which acupuncture may constitute a treatment for chemical dependency has not been fully investigated, although it has been conjectured that acupuncture, perhaps mediated by the release of endogenous opioids, modulates neural circuits in the mid-brain also affected by drugs of abuse. Han JS, Zhang RL (1993) Drug and alcohol Dependence(USA) 31, 169-175 Traditional Chinese theories of acupuncture involving ‘the rectification of chi deficiency or excess in various organ systems’, have not been adequately tested with in Western biomedical frameworks. In 1993 the HANS Acupoint Nerve Stimulator was used to treat 212 heroin addicts subjected to abrupt abstinence. Diagnosis was made according to the Diagnostic and Statistical Manual of Mental Diseases, third edition. The results from that study indicated that the mechanisms of HANS for heroin detoxification may be two fold:

The use of HANS in the post-detoxification period may help to prevent the recurrence of drug abuse, which may be even more important than its role in acute detoxification.

Auricular acupuncture is an increasingly popular intervention for the treatment of cocaine addiction in the United states.

Clinical reports suggest that auricular acupuncture induces a feeling of relaxation that reduces craving for cocaine and facilitates patient participation in counseling and rehabilitation.

To the best of our knowledge, the literature contains only two controlled studies of acupuncture for the treatment of cocaine addiction. One study conducted at Lincoln Hospital, D. Lipton,V. Brewington, and M. Smith, unpublished data and the second one from the Substance Abuse and Treatment Unit, Department of Psychiatry, Yale University school of Medicine.

In the pharmacotherapy trial, retention in treatment was excellent, and abstinence rates were modest. In the acupuncture study, the retention rate was lower, but the patients who remained in treatment did extremely well. No subject reported dropping out of the studies because of an adverse response to acupuncture treatments.

Subjects who attained abstinence in these studies exhibited decreased Beck Depression Inventory scores, a shift in self-representation away from “addict” and toward desired “non-addict” self-schemata, decreased craving, and increased aversion to cocaine cues.

In views of the widespread use of acupuncture in the treatment of drug addiction and the relative success of previous studies it is my opinion that this procedure warrants further controlled investigation as a treatment for cocaine addiction in opiate populations.

Because of the unique history of modern China, traditional medicine has been the subject of comprehensive study and testing over the past forty five years.Western clinical studies of traditional Chinese medicine, by proving its practical efficacy, have helped it win its battle for survival in the twentieth century, and promise it a place in the future of medicine.

Liu X. 1986. The Role of Nucleus Raphe Magnus in Acupuncture Analgesia and its Control by Some Higher Analgesia Structure. Acupuncture Research 9:91-100.